Frogs huddle together in the frame of Ines Roberts’ award-winning shot “Frog Assembly,” above. Roberts, a longtime Santa Barbara resident, beat out 32,000 other contestants to land in the winner’s circle for the 2007 Shell Wildlife Photographer of the Year. Roberts also was a finalist in 2003 with her piece “Waterfall Milford Sound Co.,” below.
PHOTOS COURTESY OF INES ROBERTS
By Ted Mills, News-Press Correspondent
January 11, 2008 10:49 AM

Ines Labunski Roberts’ first camera was a Zeiss Ikon, a small 35 mm camera that began this Polish-born woman’s trip into photography, a life-long obsession that recently landed her in the winner’s circle for the 2007 Shell Wildlife Photographer of the Year.
“I started in painting,” Roberts says, “but it seemed to me that photography was all about seeing — it was about constantly discovering. Wherever I go, I am an explorer.”
Those years of exploring included a trip to the Sierra mountains, where walking back down to their car, Roberts and her husband passed a hot springs pool steaming in the middle of the snowy landscape. The water was boiling hot, too much for anybody to sit in, and the snow was freezing cold, but in a drainage pipe the water was just right. Not for humans, of course, but for a knot of small frogs.
Camera at the ready, Roberts tried not to disturb the frog party as she closed in on them. The final photograph, which seems to picture the amphibians in a watery, floating space away from nature, made the final list, where Roberts went up against 32,000 photographers who didn’t have her eye or luck.
“It’s very tough for a woman of my age to go up against professionals whose job it is to travel around the world,” Roberts said.
Roberts, who is in her seventies, prefers to discuss the status of women photographers in general.
“It’s only in this year’s competition that there are more photos by women,” she says, referring to the 2.2 percent increase in female entrants from last year to this year.
Sure, a handful of women have broken through to the mainstream (Diane Arbus and Annie Liebovitz for a start), but women remain unrepresented in the photography field, Roberts notes. 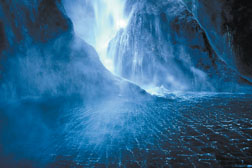 Maybe it has to do with her history. After picking up the camera, her travels (and marriage) led her to Scotland, where she was the only female member of a photo enthusiasts’ club.
“At first I didn’t want to learn all the technical things,” she says. “All the men in the club wanted to talk about optics. I was more about aesthetics. But then somebody told me, if you don’t know your tools, you will never get better.”
Ever since then, her husband Gilbert Roberts has encouraged her. An engineer by profession — he helped design mechanisms for the Hubble telescope — he was an amateur photographer when he first met Ines.
“When he met me, he sold his camera,” she says. “He told me there would be no use for it.” She adds that recently he’s once again picked up a Minolta.
Her life in Santa Barbara since settling here has been full of photographic successes. Roberts has been the subject of one-woman shows, several other awards, and taught workshops at UCSB from 1978 to 1990.
Like many photographers who have straddled the changes of the last 50 years, Roberts has slowly joined the digital revolution.
“It took me a long time to accept color film too,” she says. “But digital gives you the most wonderful freedom.”