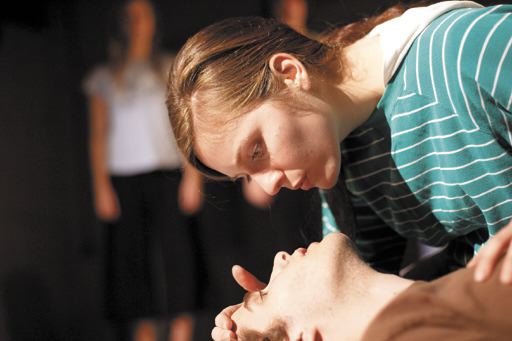 SAINTS PRESERVE US
TED MILLS, NEWS-PRESS CORRESPONDENT
February 28, 2006 12:00 AM
Westmont College adds yet another bizarre chapter to Santa Barbara’s theater scene with its current production of Erik Ehn’s “The Saint Plays.”
The chance to perform four of these short works is a coup of sorts for the theater department — even more so considering one of the plays derives directly from workshopping with the students themselves. Needless to say, this section is a world premiere.
According to the playwright, he has written almost 100 short plays based on the Catholic saints, from 40-minute pieces to short, wordless tableaux, with more to come.
Some are hagiographies, while others are “exploded biographies” — a phrase he never really defines, but, after watching Friday night’s performance, must allude to the hundreds of small pieces of narrative that will never get put back together again.

END_OF_DOCUMENT_TOKEN_TO_BE_REPLACED 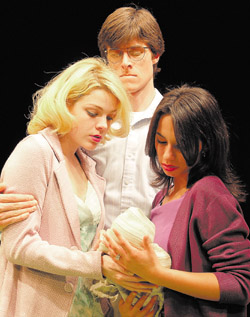 Headline-based ‘Brown Baby’ favors melodrama over characters
TED MILLS, NEWS-PRESS CORRESPONDENT
February 22, 2006 10:15 AM
An essential part of our state’s economy, illegal immigration is the dark shadow that capital casts when laws and regulations are bent or are not enforced. Illegal workers look at Americans and see the life they’d like to lead; Americans look back and see straight through the men and women who do the menial jobs or they see an amassed threat. A porous border, now more dangerous with the inclusion of the dubious “Minutemen” weekend warriors, is all that separates “us” from “them.” And both people may be more similar than we think.
Carlos Morton’s “Brown Baby” at UCSB Performing Arts Theatre comes professing its timeliness with a story ripped from today’s headlines, as they say. Only these headlines have been in the paper for years now — a situation that seems unlikely to change unless it’s going to get worse.
Maria (Victoria Ramos), with daughter Silvia (Aja Naomi King) in tow, has to leave their hometown of Oaxaca, Mexico, when her husband is gunned down by police for having ties to the left-wing opposition party. Pregnant with his child, Maria seeks out the help of the rich Doña Victoria de los Santos (Tiffany Rose Brown). Maria needs passage to America; Doña Victoria can help for a price. Indebted to the price of $3,000, Maria believes that her benefactor will get her work. What we know already is that Doña Victoria is conspiring to keep Maria just south of the San Diego border to sell off her baby in the American black market.

END_OF_DOCUMENT_TOKEN_TO_BE_REPLACED

‘Liberal’ looks to a satirical future and Bush 3.0
TED MILLS, NEWS-PRESS CORRESPONDENT
February 22, 2006 12:00 AM
“History repeats itself, first as tragedy, then as farce.” Karl Marx (by way of Hegel) may have been describing the first and second terms of the Bush administration. Or he may have been thinking of Bob Potter’s new comedy “The Last Liberal,” a sequel of sorts to the much more serious “The Space Between the Stars,” now onstage at the Center Stage Theater, a production of Dramatic Women.
Political satire is at turns easy and difficult. Easy because the Bush administration provides weekly fodder of outrage and incompetence for the nation’s comedians; difficult because there is so much material that a Harriet Miers joke would already have to be explained a bit to make it work. (Q: Harriet who? A: Exactly).

END_OF_DOCUMENT_TOKEN_TO_BE_REPLACED

What a lame ass I must be when over the last two weeks I’ve been at the Santa Barbara Intnl Film Festival with my film “The Night of the Falcon,” and instead the entry I bring you is about YouTube. But hey, whatever.
So, YouTube. At first this started as a way to load up fan films and “funny” home videos. Suddenly it’s exploded and it full of music videos and tv clips. Thank you internet. Surely this can’t last, but in the meantime, this is how TV should be: searchable and immediately viewable. I was up to 2 a.m. last night, thinking ‘just one more, it’s only 3 minutes.”
I signed up for a free account, which now allows you to subscribe to yet another of my RSS feeds. Anything I’ve marked as ‘favorite’, you can now see. Here’s the feed.
At the moment, there’s some Japanese music videos and ones from Thomas Dolby and Talking Heads. More to come soon!