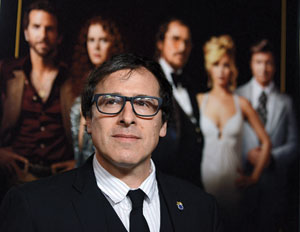 The comedian Louis C.K. recently compared David O. Russell’s directing method to playing soccer: no time-outs, no huddles, you just keep moving. “Go big or go home” is often heard on a Russell set. And interviewing Mr. Russell is like that, too. He’s all energy, running here and there from anecdote to anecdote, and even though he’s probably been telling these tales since the very first junket, he sounds absolutely in the moment, like he’s just walked off set and can’t wait to tell you about it all.

Santa Barbara will get a full evening of Mr. Russell tonight in the first of SBIFF’s celebrity tributes, as he sits down for a career retrospective and the Outstanding Director Award.

END_OF_DOCUMENT_TOKEN_TO_BE_REPLACED

Santa Barbara International Film Festival photos
You can’t take movie watching lightly at SBIFF. If you’re a newbie, bear in mind that attending a film at the Film Festival is not like your usual night out at the multiplex. There are lines. And not only are there lines, there are lines to stand in other lines. And there are passes and ticket booklets and — in the case of films at the Metro — four films going on at the same time. Oh my! So choosing a film is a careful proposition.

Every film festival has surprises, and the films that get the buzz are sometimes the ones that don’t jump off the schedule page. But here are 14 must-see events for your first week of cinema going at the Fest.

END_OF_DOCUMENT_TOKEN_TO_BE_REPLACED

After a year of planning and some last-minute adjustments, the 29th installment of the Santa Barbara International Film Festival kicked off Thursday night in its usual spectacular fashion: spotlights raking the sky, crowds swarming the Arlington, the red carpet rolled out and awaiting the arriving limousines. Inside, the packed audience waited for the lights to dim and the opening night movie to play, preceded by introductory speeches by Executive Director Roger Durling, board members, and a screening of the introductory intro film that will accompany every screening over the Fest’s next 11 days.

And here’s the tally for this year’s Fest: 156 film from around the world, including 22 world premieres and 31 U.S. premieres; a bevy of Hollywood stars set to receive awards or sit on industry panels; several free screenings for area schoolchildren, and numerous film genre sidebars, including the local favorite “Screen Cuisine,” because Santa Barbarans love to watch documentaries about food and wine.

END_OF_DOCUMENT_TOKEN_TO_BE_REPLACED

There’s always been something in actress Cate Blanchett’s eyes that has made her a star, perhaps it’s this sense that behind her most glamorous characters, there’s a touch of pain. It’s a vulnerable beauty she’s used to good effect from playing Katherine Hepburn in “The Aviator” to her role in “Babel.” She also plays characters enigmatic —”Elizabeth I,” and ethereal — Galadriel in “Lord of the Rings.” But it’s her stunning, lead role in Woody Allen’s “Blue Jasmine” that has justifiably earned her a sixth Oscar nomination and this year’s “Outstanding Performer of the Year” award at the SBIFF (Saturday at the Arlington).

And what a role it is, in one of Woody Allen’s best films in a long time. Ms. Blanchett’s Jasmine is a woman not just on the verge of a nervous breakdown, but living through one in real time. In flashback, we learn she lived the life of luxury with her Bernie Madoff-like husband, but when he went to prison, she lost everything. Now she has to move in with her sister, whose savings her ex also lost. Yet, Jasmine refuses to face facts and continues to live in a fantasy world of excess. Ms. Blanchett plays her just this side of sympathy, bringing all that vulnerability to the fore.

END_OF_DOCUMENT_TOKEN_TO_BE_REPLACED

We have no skin in the Superbowl over here at Drink of the Week. We’re neither secretly rooting for Seattle nor Denver, so we think that makes us qualified to make this totally unscientific prediction for Sunday’s game, based entirely on cocktails.

We took up with Anna Sacks over at the Bourbon Room to help us out, with the request: make one cocktail for each team, we’d taste test, and — just like that octopus that predicted the World Cup — the winning cocktail team will obviously go on to win the Big Game. Yes, that’s right! (All psychic predictions are for entertainment value only, as they say.)

END_OF_DOCUMENT_TOKEN_TO_BE_REPLACED

While stargazers love the “international” part of the Santa Barbara International Film Festival, some film lovers maintain focus on the Santa Barbara part. For many local directors, the Fest is their first experience in the thrill of the film circuit, and the first time to see their masterpiece on the big screen. For friends and family, it’s a chance to come and support the director after watching her or him go through long nights, even years, trying to complete a film.

And there are lots of Santa Barbara filmmakers and film subjects this year. The festival offers a program of five short documentaries and eleven short fiction films, as well as seven feature films. On top of that, several films have Santa Barbara connections.

For example, pro surfer and longtime Santa Barbara resident, Shaun Tomson, features in “A Life Outside,” Catherine Brabec’s documentary on the surfing culture that grew up around Casino Pier in Seaside Heights, N.J. These guys used to drop into waves, while above them, people were dropping down on rollercoaster cars.

“I think that Catherine really captured the spirit of the place,” he says. The production crew came to Mr. Tomson and filmed his segments here — he used to hang with a lot of the New Jersey guys and provides commentary in the film.

Mr. Tomson, who came to Santa Barbara in 1977 to surf Rincon and then in 1995 to live here, was last in the festival in 2008 with “Bustin’ Down the Door,” a surf feature about himself, Wayne “Rabbit” Bartholomew and Mark Richards, and how they revolutionized surfing. (Mr. Tomson also executive produced.)

A director with ties to Santa Barbara and its art scene is Susanna Vapnek. If her last name looks familiar, it’s because she’s the daughter of Dianne Vapnek, who used to head Summer Dance. Susanna’s film is “Mabon ‘Teenie’ Hodges: A Portrait of Memphis Soul,” a chance to bring out of history’s dustbin the story of the man who wrote many of Al Green’s hits, including “Take Me to the River.” She just moved back to Santa Barbara last year, after many years in New York. The movie took her four years to make, and started when she met Teenie Hodges when she was tour manager for Cat Power’s “The Greatest Tour.”

“I got a camera and started filming him,” is how she says it started. (Teenie Hodges is planning to attend the screening.) Ms. Vapnek will promote the film, but with a new daughter, she’s also going to return to her painting and enjoy Santa Barbara.

T.S. Meeks grew up in Solvang. His parents started the Bulldog Cafe, although they’ve since sold it. He moved to L.A. eight years ago, but returns once a month to see family, and now he’s returning to screen his first, self-funded short, the dramatic, wedding-night film, “To Us,” a tale of a couple breaking down after a simple question unravels their security.

“I’m hoping each person who sees the film has their own opinion on the events,” he says. This year marks his first-ever film festival. “I’m excited,” Mr. Meeks says. “It should be a great week.”

END_OF_DOCUMENT_TOKEN_TO_BE_REPLACED

“The minute they walk out the door, the camera starts rolling!”

It was a bit of hyperbole (no cameras rolled at all) but in terms of the 10-10-10 Student Filmmaking competition, the movie-making started on Tuesday afternoon after a brief press conference at the Canary Hotel.

Michael Stinson of Santa Barbara City College ended the announcement with the above words, flanked by his partner, Guy Smith of Antioch University, and the 19 high school and college-aged contestants.

They now have until the end of the Film Festival on Feb. 9 to shoot and edit a 10-minute film.

END_OF_DOCUMENT_TOKEN_TO_BE_REPLACED

Various artwork of Jimmy’s Oriental Garden as seen through the ages and currently on display at the restaurant now known as The Pickle Room.The Pickle Room aka the Bar Formerly Known as Jimmy’s Oriental Gardens is still one of the most picturesque buildings in downtown Santa Barbara, not just because of its pleasing facade, tile work, and faux-Chinese theme, but because of the decades of memories ensconced within.

This Friday, owner Bob Lovejoy opens the bar for its first ever art show, and the subject is the building itself. (After owner Tommy Chung closed the bar in 2006, Mr. Lovejoy kept the faith and finally reopened the rechristened spot last year, keeping much of the decor and the vibe.) Over the years, local artists have painted Jimmy’s in all sorts of styles, from photo realist to impressionist. Nearly a dozen paintings will be on display alongside the Pickle Room’s usual decorations, like the 1920’s Chinese cheesecake posters and the good luck knot of red rope.

END_OF_DOCUMENT_TOKEN_TO_BE_REPLACED

The Arlington Theatre rolled out the red carpet last Thursday night, not for the Santa Barbara International Film Festival (that’s later this week), but for a day-long screening of social justice films called the “Pop Up Film Festival.” The creation of filmmaker Daniel Bollag, the Festival was a one-day, 12-hour affair, with a series of seven films screening from noon to midnight with stops along the way for audience discussion, promotional tables in the lobby, a bar on the patio for guests, live music outside, and the aforementioned red carpet, which the Arlington extended out to the street.

“I didn’t really worry about turnout so much,” Mr. Bollag said as he took a quick break from the proceedings. “This is all about giving these films a voice. A lot of these films will not be shown in the normal film festivals.”

END_OF_DOCUMENT_TOKEN_TO_BE_REPLACED

Emma Thompson fans looking forward to seeing the star on the red carpet or hearing her talk about her career next week at the Santa Barbara International Film Festival found themselves disappointed late Monday when the festival announced that the star had canceled her scheduled appearance.

Ms. Thompson was due to receive the Modern Master Award on Feb. 8, but, according to a festival release, she “is required for rehearsal in London on the New York Philharmonic staging of Stephen Sondheim’s Sweeney Todd.”