We wouldn’t want any frivolous lawsuits now, would we?

Iraqis lose right to sue troops over war crimes
Military win immunity pledge in deal on UN vote
Kamal Ahmed, political editor
Sunday May 23, 2004
The Observer
British and American troops are to be granted immunity from prosecution in Iraq after the crucial 30 June handover, undermining claims that the new Iraqi government will have ‘full sovereignty’ over the state.
Despite widespread ill-feeling about the abuse of prisoners by American forces and allegations of mistreatment by British troops, coalition forces will be protected from any legal action.

Geneva Conventions: Justice Memos Explained How to Skip Prisoner Rights
On Jan. 25, 2002, Alberto R. Gonzales, the White House counsel, in a memorandum to President Bush, said that the Justice Department’s advice was sound and that Mr. Bush should declare the Taliban as well as Al Qaeda outside the coverage of the Geneva Conventions. That would keep American officials from being exposed to the federal War Crimes Act, a 1996 law, which, as Mr. Gonzales noted, carries the death penalty.

Now the forensic experts are chipping in. Unsurprisingly, this is only in the Asia Times. Of course, Berg is still dead, and there haven’t been any autopsies. But what exactly happened we still don’t know. Plus, is the U.S. pushing al-Zarqawi as the numero uno bad guy because they know something about Osama? You have to keep the fear rolling, people.

Berg Beheading: No Way, say medical experts
By Ritt Goldstein
American businessman Nicholas Berg’s body was found on May 8 near a Baghdad overpass; a video of his supposed decapitation death by knife appeared on an alleged al-Qaeda-linked website (www.al-ansar.biz) on May 11. But according to what both a leading surgical authority and a noted forensic death expert separately told Asia Times Online, the video depicting the decapitation appears to have been staged.

So much awfulness, every bloody day, it’s hard to know where to start. I’m not one of these full-time bloggers either, so I have to pick and choose my outrages. But this wedding-party massacre is pretty infuriating.

Guardian Unlimited | Special reports | ‘US soldiers started to shoot us, one by one’
Survivors describe wedding massacre as generals refuse to apologise
Rory McCarthy in Ramadi
Friday May 21, 2004
The Guardian
The wedding feast was finished and the women had just led the young bride and groom away to their marriage tent for the night when Haleema Shihab heard the first sounds of the fighter jets screeching through the sky above.
It was 10.30pm in the remote village of Mukaradeeb by the Syrian border and the guests hurried back to their homes as the party ended. As sister-in-law of the groom, Mrs Shihab, 30, was to sleep with her husband and children in the house of the wedding party, the Rakat family villa. She was one of the few in the house who survived the night.
‘The bombing started at 3am,’ she said yesterday from her bed in the emergency ward at Ramadi general hospital, 60 miles west of Baghdad. ‘We went out of the house and the American soldiers started to shoot us. They were shooting low on the ground and targeting us one by one,’ she said. She ran with her youngest child in her arms and her two young boys, Ali and Hamza, close behind. As she crossed the fields a shell exploded close to her, fracturing her legs and knocking her to the ground. 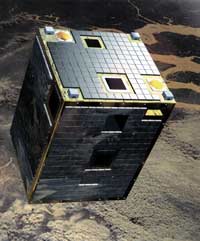 I really love the look of the European Space Agency’s new satellite, Portal (or Proba. Or something). It’s square! It looks like a washing machine! Imagine if you had drawn this for a sci-fi comic–you’d be laughed off the page.

The Jesus Landing Pad by Rick Perlstein
It was an e-mail we weren’t meant to see. Not for our eyes were the notes that showed White House staffers taking two-hour meetings with Christian fundamentalists, where they passed off bogus social science on gay marriage as if it were holy writ and issued fiery warnings that “the Presidents [sic] Administration and current Government is engaged in cultural, economical, and social struggle on every level”

For years David Barsalou painstakingly hunted down the original comic panels that formed the basis of Roy Lichtenstein’s pop art. The full site is no longer up but all the comparison panels are. What did Lichtenstein add and what did he take away? And is this sampling? And can anybody sue?

From the White House, a nightmare scenario
White House officials say they’ve got a ‘working premise’ about terrorism and the presidential election: It’s going to happen. ‘We assume,’ says a top administration official, ‘an attack will happen leading up to the election.’ And, he added, ‘it will happen here.’ There are two worst-case scenarios, the official says. The first posits an attack on Washington, possibly the Capitol, which was believed to be the target of the 9/11 jet that crashed in Pennsylvania. Theory 2: smaller but more frequent attacks in Washington and other major cities leading up to the election. To prepare, the administration has been holding secret antiterrorism drills to make sure top officials know what to do. ‘There was a sense,’ says one official involved in the drills, ‘of mass confusion on 9/11. Now we have a sense of order.’ Unclear is the political impact, though most Bushies think the nation would rally around the president. ‘I can tell you one thing,’ adds the official sternly, ‘we won’t be like Spain,’ which tossed its government days after the Madrid train bombings.

Yep, we’re certainly not going to be like Spain, where they went on to have elections…yep, we’re going to cancel ours…yep…

Wow, does this administration just look at a world map every week and go after countries it hasn’t alienated? I first heard this story on KPFK and followed up back on Google. Unbelievable.

The more I thought about this other comment on Daily Kos, the more I knew I should post it.

I grew up on a farm.