Patricia Fresen knows what it’s like to wait for change, to watch it happen not overnight but over the course of many tumultuous years. Born in South Africa, Ms. Fresen watched the fall of the apartheid era while she was a member of the Dominicans, the Catholic religious order.

“Once you become aware of injustice in one area of life,” says Ms. Fresen, “you somehow become aware of it in other areas. Having been sensitized to racial injustice, I started becoming aware of gender injustice. It is just as bad.”

END_OF_DOCUMENT_TOKEN_TO_BE_REPLACED

The chorus of Gram Rabbit’s new single/video “Candy Flip,” full of disco and distorto guitars, says it all about the Joshua Tree-based band. They have the good stuff and they know you want it, that psychedelic nugget, and their domicile is the only place it makes sense. They are the musical equivalent of the opening paragraph of “Fear and Loathing.” But sometimes, they venture outside the Rabbit Ranch and come visiting, which they will this coming Thursday, to SOhO Restaurant and Music Club.

END_OF_DOCUMENT_TOKEN_TO_BE_REPLACED 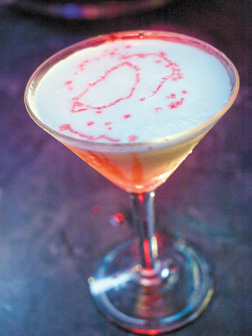 Let’s face it. Choosing “The Study Hall” as a bar name in the center of college students heaven/hell is the height of wit in a block full of d’oh-inspiring shop names. (“The IV Drip” coffee shop! “Naan Stop” Indian take-out!) How comforting knowing that you can tell the old folks at home that you spent all day (and night) at the Study Hall.

Jason Smith has been serving here for seven years. The regulars all call him Smitty. Come here twice and you too will be a regular. As one of the two bars in sizzled and schnookered Isla Vista, The Study Hall has its work cut out for it. How to convince students to drink here, when the liquor store and a Del Playa house offers a cheaper night out?

END_OF_DOCUMENT_TOKEN_TO_BE_REPLACED

A bit contemporary dance, a bit Vegas, a bit hip-hop, a whole lot of attitude and a dash of silliness. You can’t really pin down these Pin-Down Girls, but know this: SOhO loves them and is having the “variety dance troupe” back tonight for another evening of sexy dance routines.

“People like to jump to the conclusion that we’re a burlesque company,” says Devin Fulton, executive artistic director and one of the eight Girls. “And I like to say we’re not. At all.”

END_OF_DOCUMENT_TOKEN_TO_BE_REPLACED

“Are there any children in the audience?” asked Dee Dee Bridgewater at the Lobero on Friday night. There weren’t. “I don’t want them to think this is what jazz singers look like.”

Ms. Bridgewater’s joke — after a very naughty and bawdy series of double entendres — spoke a truth about the entire evening. Ms. Bridgewater doesn’t fit many people’s safe or generic idea of a “jazz singer” either. At 59, she’s a singular force, roiling with life.

END_OF_DOCUMENT_TOKEN_TO_BE_REPLACED

These are lines that echo through Scandar Copti and Yaron Shandi’s assured debut feature “Ajami,” which takes a look at the underbelly of the title Israeli town, a religiously mixed community of Muslims, Jews and Christians. Bravado, anger, ego and unworkable ideas of honor conspire against a mix of characters.

END_OF_DOCUMENT_TOKEN_TO_BE_REPLACED

Short-term profit or long-term gain? Jobs for now or healthy environments for our children? The topics of Henrik Ibsen’s play, “An Enemy of the People,” could come ripped from today’s headlines, as they say. But the ripping already started some 128 years ago, and those headlines were in Norway. In Carey McKinnon’s Valley Community Theatre production, those issues return once again to resonate in the present. The play opens tonight and features a large cast, drawing from the Valley community.

“Enemy of the People” concerns Dr. Thomas Stockmann (Jim Farnum), who becomes concerned when he learns the healing waters of a popular local spa are polluted by runoff from the tanneries. Speaking out means financial ruin for the town, whose mayor is Stockmann’s older brother (Jeff McKinnon, Carey’s husband). The truth, as we find out, will not set Stockmann free. Instead, it will make him the most hated man around. “Enemy” asks how far we would go, and what we would risk, for the sake of the truth.

END_OF_DOCUMENT_TOKEN_TO_BE_REPLACED

Like an ideal child’s toy at Christmas, A.R. Gurney’s “Love Letters” requires very little assemblage, has only two movable parts, and has easy-to-follow instructions. This table read through of a couple’s love letters — from childhood mash notes to old-age epistles — has grown from a little bit of theater to a worldwide hit. Its original 1989 production featured a cast that changed weekly, with big name stars (William Hurt, Marsha Mason, et al) taking on the roles. There’s been foreign adaptations — one rewritten in Urdu for Indian culture — and even a performance by Gov. Schwarzenegger and his wife Maria Shriver.

The revolving cast is part of what keeps the play going — and Ojai ACT offers four different versions this month for the price of one. See all four or choose one.

END_OF_DOCUMENT_TOKEN_TO_BE_REPLACED

After Remains of the Day, who would have thought that Kazuo Ishiguro would have in him a dour, sci-fi novel set in a sort of boarding school. To talk about the plot would be to ruin what is essentially a 280 page slow reveal, where little of slivers of awfulness and horror find their way into the story, making us recoil in disgust as we glimpse only a fraction of the world that exists outside Ishiguro’s narrative. Told in first person from a naive standpoint, the book “wants us to inhabit their ignorance, not ours” according to a Powells.com essay. The novel never holds steady or lets us gather our bearings, we spend the novel perpetually leaning forward, trying to grasp meaning among the mundane storytelling. Ishiguro lets us figure out the more horrific passages ourselves, and that’s what make it so stomach-churning. Mark Romanek is directing the inevitable film version, for which, no doubt, all secrets will be revealed in the trailer. Could be read as the metaphoric story of a cow on its way to the slaughterhouse.
(The book infected my dreams more than once, a good/bad sign.)

If there were theater awards for making one’s own professional life difficult, SBCC’s Katie Laris should get some sort of nomination for putting on Nikolai Erdman’s 1928 farce “The Suicide.” When her first choice of a play became unavailable in January, did she look at her schedule and think “let’s fill the small Interim Theater with 18 actors instead, all playing characters with long Russian names?” One wonders.

“The Suicide” is not well-known, even among fans of theater. Banned in its lifetime, resurrected in the 1960s and performed occasionally ever since, Erdman’s play courses the woes of post-revolutionary Russia and a pointed critique of groupthink. It also overflows with a Brueghel-esque cast of characters and/or caricatures. It’s a history piece, no doubt. Is there enough between the lines to sustain a night at the theater?