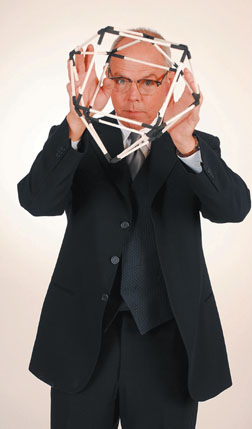 MARTIN S. FUENTES PHOTO, COURTESY OF RUBICON THEATRE
By Ted Mills, News-Press Correspondent
January 11, 2008 10:50 AM
When playwright Doug Jacobs was a UCSB freshman back in the late 1960s, his older brother told him one day to stop by the College of Creative Studies building to catch R. Buckminster Fuller holding court. The engineer, inventor and all-around Renaissance Man was “thinking out loud,” as Fuller used to say.
“I asked my brother when I should stop by,” says Jacobs. “He said to come whenever, Fuller was talking all day.” It turned out to be true. Jacobs listened, got hungry, went to dinner, and came back. Fuller was still there, as were the usual assemblage of Fuller groupies.
The sheer proliferation of Fuller’s works and thoughts are only a fraction of what Jacobs, many decades later, would have to draw from in condensing one man’s life into a one-man show at the Rubicon Theatre. Starring Joe Spano, “R. Buckminster Fuller: The History (And Mystery) of The Universe” opens Thursday.
“His idea that an individual can solve these big problems is very American,” says Jacobs, “It’s very ‘A Connecticut Yankee in King Arthur’s Court.’ ”
Fuller’s star may have fallen a bit in the national consciousness in recent years. He is still best known for the geodesic dome or sphere, the utopian bubble structure that can be seen at places like Walt Disney World or in Toronto.
But for Jacobs and other fans of Fuller, he is best known for his futurism, his faith in humanity and man’s ability to evolve, change, think, and his science-turned-spiritual philosophy, which places him in a long line of Americans stretching back to the Transcendentalists like Emerson and Thoreau.
Actor Joe Spano, a veteran of four Rubicon Theater productions and a film and television stalwart, with long stints on “Hill Street Blues” and “NYPD Blue.”
Spano says playing Fuller’s character — or “Bucky” as his fans call him — has been a journey into a complicated mind.
“It’s like going down the rabbit hole,” he says of trying to figure out Fuller. “I hope to come out with a picture of Bucky that people will be able to grasp. There’s a lot of truth in this play, but it’s important to keep the message broad. He was not dogmatic, and he was not paternalistic. He did not do anything that would take away another individual’s responsibility.”
Central to Fuller’s personality — and to the play’s autobiographical sections — was the death of his daughter when Fuller was only 32 years old, and relatively unknown.
Suicidal and alcoholic, Fuller underwent a crisis that led to an epiphany, a life-changing idea to become a human experiment in individual potential.
“I was working on this around the same time as (an adaptation of) ‘A Christmas Carol,’ ” Jacobs says. “And the two plays began to melt together. Bucky reinvents himself.” Unlike Scrooge, Fuller had decades to explore his new ideas.
Jacobs, who premiered the play back in 2000 at San Diego Repertory Theater, which he co-founded, sought out Spano for the role after their shared history at Berkeley Rep. “We always wanted to work with him,” says Jacobs.
For Spano, the one-man show is not a new challenge, but being Bucky is unlike anything he’s done before.
“He was dedicated to humanity, as cliché as it sounds,” he says. “He was in no sense an Eastern mystic. His ideas of transformation were very American in a very muscular way.”
‘R. BUCKMINSTER FULLER: THE HISTORY (and Mystery) OF THE UNIVERSE’
When: 8 p.m. Thursday through Feb. 10
Where: Rubicon Theatre, 1006 E. Main Street, Ventura
Cost: $29-$52
Information: 667-2900, www.rubicontheatre.org
©2008 Santa Barbara News-Press