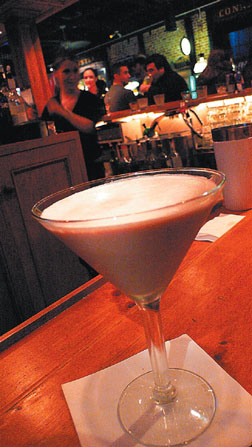 These have been hard times for the mixology crew — the cold/flu illness won’t go away, one of our drinking partners is on holiday, the rain and the freezing weather . . .
So it’s nice to know, in these hard times, that two things stay constant: The delicious taste of a sweet, sweet cocktail and the cozy warmth of Dargan’s Irish Pub &amp; Restaurant.
Bartender Yvonne Owens puts in the kind of energy and speed to serve customers that would shame another person twice her size. Being Irish, she’s in her element pulling Guinness here in the back room bar (Dargan’s has two bars), which she’s been doing most nights for over two years.
Dargan’s indeed has a drinks menu and offers some strong martinis. But we’re in Owens’ hands now and her gears are turning. She first sets us up with an Irish Soda, a mad mix of Guinness, Coca-Cola, Kahlua and vanilla vodka. The key to the cocktail comes in getting enough Guinness to float and form its trademark creamy head, while underneath, the sweet liquors mix into something strong and refreshing.
“Is that enough Guinness?” Owens asks us, clearly concerned about making the drink just right, even as she juggles a bar becoming busier by degrees.
The most famous Irish shot is undoubtedly found at the bottom of a pint glass — the remnants of an Irish Car Bomb (a shooter of Bailey’s dropped into a half-pint of Guinness) — but Owens wanted to show us more. So we wound up with something called The Reacharound, a drink surely designed to embarrass us.
In a shot glass, Owen mixed Stoli Blueberry, Stoli Vanilla, Chambord, soda water and fresh cream, then topped it with whipped cream. The “Reacharound” entails the friendly interlocking of arms and the simultaneous downing of the drink.
Seeing we could take the drink, Owens sent us out into the night with a cocktail created on the spot. We even got to name it, a first for this column. Next time you’re at Dargan’s, ask for a Dargan Dangler. Its creamy texture finishes off an evening meal and tastes like a chocolate covered orange. It has our blessing.

Combine all in a shaker with ice, shake and strain into martini glass.