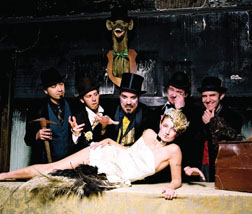 What is it about Portland that has made it such an incubator of great music? The scene is thriving, not just on a national stage (The Shins, Pink Martini) but on a local one, with a live scene that makes Santa Barbara’s look like an elementary school talent show and jumble sale. One reason, suggests Eric Stern, leader of the Vagabond Opera: money and time.

“Things are cheap,” he says. “Unlike California, the people have a lot of time to sit around and play music and play together. Portland is a great crossroads for that, it’s a musical laboratory.” Stern adds that the community is small — he attends school functions for his kid and runs into members of The Decemberists.

Opera, you say? Well, it is in the title. And it’s in the band’s voices. Stern has made it one of the ensemble’s missions to bring opera out of the stuffy cultural mothballs and set it back into context as the people’s music. A Verdi aria sits alongside the band’s own material and covers, while the steampunk-bordello look of the stage antics are miles away from any traditional production. Stern himself has the twirled mustache and pointed goatee of a devilish barker.

“People look at our costumes and music and think we’re old-timey,” he says. “But the music is pretty complex and pretty new.”

Stern grew up in Philadelphia in a musical family. He has memories of the Italian neighborhoods there, where opera was populist and “never for the elite.” His voice instructor was a building contractor, a regular guy, who ran a community operatic company.

“At some point in my 20s I did feel like opera wasn’t exactly relevant to my peers. And I wanted to start something new, I wanted to distill it and have it in a smaller ensemble. I wanted theatrical things going on.”

Stern started the Vagabond Opera in Portland and set his sights on the world and all its musics, rethinking all these genres from the turn of the last century, up through the 1930s. Vagabond Opera has released three albums as of last year, with the most recent called “The Zeitgeist Beckons.” Stern has several other projects as well. He plays on Decemberists albums, plays accordion in the Arabic and Turkish ensemble Hazz Hazz Hulu and leads the Eric Stern Trio.

Stern took the six-piece band on tour across the country and into Europe, where they found themselves jamming with Spanish, Portuguese and Greek musicians.

“For us it has become an ethnomusicological expedition, so that energy exchange keeps happening,” Stern says. In March they travel to Poland and Stern has his eyes set on France.

But for now they are touring the coast, and making sure to be as sartorially complex as their music.

“I’ve seen many bands in jeans and T-shirt as a de rigueur uniform,” he says. “That’s a choice, and a costume, even when you think it is not. It’s lazy. So this is about giving something to the audience, and I don’t want to be lazy when it comes to that.”