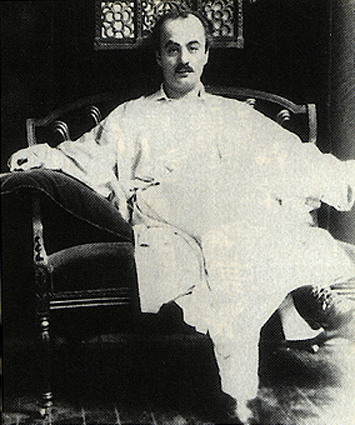 Here’s a good profile in the New Yorker on Kahlil Gibran, author of The Prophet, a book that continues to sell well into its 8th decade. Gibran turns out to be an odd fellow indeed who luckily hooked up with the right kind of dependent relationship.

Mary Haskell, the headmistress of a girls’ school in Boston, was a New Woman. She believed in long hikes, cold showers, and progressive politics…She was not rich, but by careful thrift—the school’s cook, who also had some wealthy employers, sneaked dinners to her from their kitchens—she managed to put aside enough money to support a number of deserving causes: a Greek immigrant boy who needed boarding-school tuition, and another Greek boy, at Harvard. Then she met Gibran, who would be her most expensive project.

In the beginning, her major benefaction to him was simply financial—she gave him money, she paid his rent. In 1908, she sent him to Paris for a year, to study painting. Before he went abroad, they were “just friends,” but once they were apart the talk of friendship turned to letters of love, and when Gibran returned to Boston they became engaged. It was apparently agreed, though, that they would not marry until he felt he had established himself, and somehow this moment never came. Finally, Haskell offered to be his mistress. He wasn’t interested. In a painful passage in her diary, Haskell records how, one night, he said that she was looking thin. On the pretext of showing him that she was actually well fleshed, she took off her clothes and stood before him naked. He kissed one of her breasts, and that was all. She got dressed again. She knew that he had had affairs with other women, but he claimed that he was not “sexually minded,” and furthermore that what she missed in their relationship was actually there. When they were apart, he said, they were together. They didn’t need to have “intercourse”; their whole friendship was “a continued intercourse.” More than sex or marriage, it seems, what Haskell wanted from Gibran was simply to be acknowledged as the woman in his life. As she told her diary, she wanted people to “know he loved me because it was the greatest honor I had and I wanted credit for it—wanted the fame of his loving me.” But he would not introduce her to his friends. “Poor Mary!” Waterfield says. Amen to that.

Acocella links this way of interpersonal behavior to his writing:

Then, there is the pleasing ambiguity of Almustafa’s counsels. In the manner of horoscopes, the statements are so widely applicable (“your creativity,” “your family problems”) that almost anyone could think that they were addressed to him. At times, Almustafa’s vagueness is such that you can’t figure out what he means. If you look closely, though, you will see that much of the time he is saying something specific; namely, that everything is everything else. Freedom is slavery; waking is dreaming; belief is doubt; joy is pain; death is life. So, whatever you’re doing, you needn’t worry, because you’re also doing the opposite. Such paradoxes, which Gibran had used for years to keep Haskell out of his bed, now became his favorite literary device. They appeal not only by their seeming correction of conventional wisdom but also by their hypnotic power, their negation of rational processes.

It’s well worth a full read. Thanks to Mr. C for the link.